As the years went by both of us and a number of other cats would hang out a lot. We would shoot ball outside or at any gym we could find, go to Landover Mall, PG Plaza or Georgetown on the regular, hit splash parties, cookouts or just cruise around the city. We attended different high schools, but always found the time to chill. I still remember how he and I rolled up in his Plymouth Horizon to see “Coming to America” and the only music we had in his car was a tape recorder. But the main thing that I never forgot is that we used to go to church together a lot. Well, let me clarify that, he used to sit in front of my Mom’s house and beep the horn ‘til I came out dressed for church. I’m talking about those mornings that I didn’t want to move. He would be like “C’mon G, let’s go” We would go to whatever church we felt like going to that particular day. He was fairly diligent in studying the Bible and I always got a lot more insight after we had discussions about spiritual things. Now with all that being said, that never stopped us from ‘creeping’ out of church during the service and hittin’ up KFC or Dunkin’ Donuts occasionally. We also would attend special evening programs or after church concerts. Now of course there would be some fine sistahs at these church events and we’d try to kick game to the ladies when we saw an opportunity. Being that he had a car and driver’s license, he had the upper hand in that scenario. I was still on the Metro bus ere’day. A few months later after my 16th birthday, he took me to MVA and let me use his car to take the test. Now, you don’t think that I failed do you? C’mon now, that brotha schooled me on how to go about the test and what to watch out for. I passed with flying colors. I went home and practically begged my Mom to let me use her ’72 Volvo stationwagon. Reluctantly she agreed to let me use the car. That night me, Eddie and Khari were off to go see “I’m Gonna Git You Sucka” at the Allen Theater.

Those were just a few memories out of thousands that I have in my head. After we graduated from high school, we still kept in touch. That summer we walked around the DC area sportin’ bald heads and Champion headbands. That was the thing back then. People quite often would ask if we were brothers. After the summer was over, I left for the Navy and he left for Oakwood College in Huntsville, Alabama. We would write each other often during that time. We both went through difficulties adjusting to our new surroundings. I still have a bunch of letters that he sent me in boot camp telling me to keep my head up. A few years later when I came back home, he had transferred to University of Maryland and we were back in business. Back to hanging out, shootin’ ball and just cruisin’ the city listening to rap classics and smooth grooves. Now things had changed a lot, both of us became involved in somewhat serious relationships and we didn’t kick it as much as we had before since we had women in our lives. Plus, being that he was a pre-med honors Biology major, he was constantly studying and he was working at NIH. I wasn’t exactly free myself as a Regional Manager sellin’ phones for Cellular One and goin’ to school in the evenings at PG Community College. But whenever we had time, we’d hang out together with other folks and just chill. 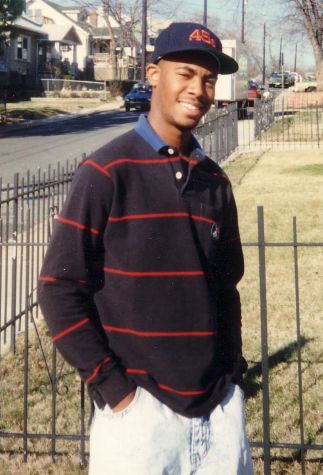 11 thoughts on “Tribute to a True Friend”