From the time that I was in kindergarten as a youngster, I discovered something unique about myself that other kids did not have. While most children I came in contact with had some soft of birthmark, I was one who had no such indication on the surface of my skin. What I was born with was much more noticeable in a sense, but a lot of kids never took notice initially. It was a trait that both my mom and her father (my grandfather) possessed. It was something that made tracing the outline of my hands a lot more exciting in the 1st grade. When the 25 students in class traced their hands and the teacher placed the pictures on the wall outside of the classroom, my hands stood out much more than the others. Wanna know why? Take a look at my hands.

Click the pic for a LARGER view of my hands 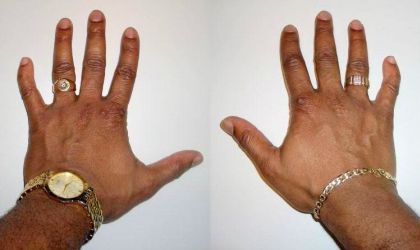 What is the one thing you see that stands out?

Obviously, the correct answer is E. These crooked pinky fingers are a gentic trait that I share with my mom, my younger brother and one that my grandfather had as well. I’ve always been aware that my pinky fingers were crooked. I remember family members pointing out my fingers to my mom as they told her that she couldn’t deny me. Until a few weeks ago I never knew that there was a medical term that defined the condition of my fingers. While getting a routine check-up, my orthopedic doctor looked at my hands and said “Hey… you’ve got Clinodactyly”. I looked at him with my eyebrows raised and said “I’ve got Clinodacta whaaaat??” He then explained to me the genetic disorder that was prevalent in my family.

Definition of Clinodactyly – courtesy of MedicineNet.com

Clinodactyly is a minor congenital malformation (birth defect). The basis for the clinodactyly is that the middle bone in the fifth finger is underdeveloped and, instead of being rectangular, is wedge- shaped.

Clinodactyly may occur as an isolated finding in a person who is entirely normal or it may be found in association with other congenital malformations and, sometimes, mental retardation. It is a common component of Down (trisomy 21) syndrome and Klinefelter (XXY) syndrome. No treatment is required for clinodactyly.

“Clinodactyly” is derived from the Greek “klinein” (to bend, slope or incline) and “dactylos” (finger, toe). Other English words formed from “klinein” include “clinocephaly” (a condition that causes skull depression or flatness) and “clinophobia” (fear of going to bed–that is, to bend the head to a pillow.) Other English words formed from “dactylos” include “dactylogram” (fingerprint) and “dactylography” (the study of fingerprints).

I never knew that name of it, I just knew that I had crooked pinky fingers. I was accustomed to people making jokes and laughing at them. I could never make a bet with someone and join pinky fingers with them to seal the deal with a chuckle or a strange look from them. In 1990 when I was being fingerprinted prior to going to the Navy, the technician bust out laughing when trying to get an imprint of my fingers. For every other finger the pressed into the ink and rolled onto the sheet. However with my pinky fingers, all they had to do was press and stamp flat. I swear that over the past 20 years I’ve answered the question “Hey, did you break your finger” over and over and over again. Each time the question has been asked I hold up both hands together and sarcastically say “Yeah, I broke both of em at the same time”. The response generates laughs and I then explain the genetics as best as I can.

I think it’s kinda cool to have em. It’s something that sets me apart from everybody else, yet it reflects a connection to my family.